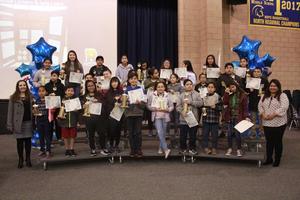 “What impresses me the most is how hard our students work to put these projects together,” District Science Fair Coordinator Amy Arreola said. “Every year, the science fair projects seem to get better and better, and we have to thank our science fair coordinators and teachers at each campus, because we could not do this without them.”

Students stood beside their project poster boards and presented their hypotheses, research, data and results to their families, friends, teachers and passers-by. The event concluded with an awards ceremony, when students received a certificate for participation and a trophy for first, second or third place (See full list of winners below).